Blueberries were the first half of our bulk order from Lancaster Farm Fresh. The second half? Cucumbers. Twenty pounds of them, in fact. We made a three things: bread-and-butter pickles, relish, and some fridge dill pickles. That covered about 16lb of them—the rest got put into salads. There’s one thing I wish we could have done: natural pickles a/k/a fermented pickles a/k/a lacto-pickles a/k/a the Real Deal. But it was too hot in these parts, and my DIY ethic of building my own thermostat for a fermentation chamber trumped my GTD ethic of actually having a thermostat. So the Real Deal will have to wait for the fall (or whenever I finish building the damn thing). 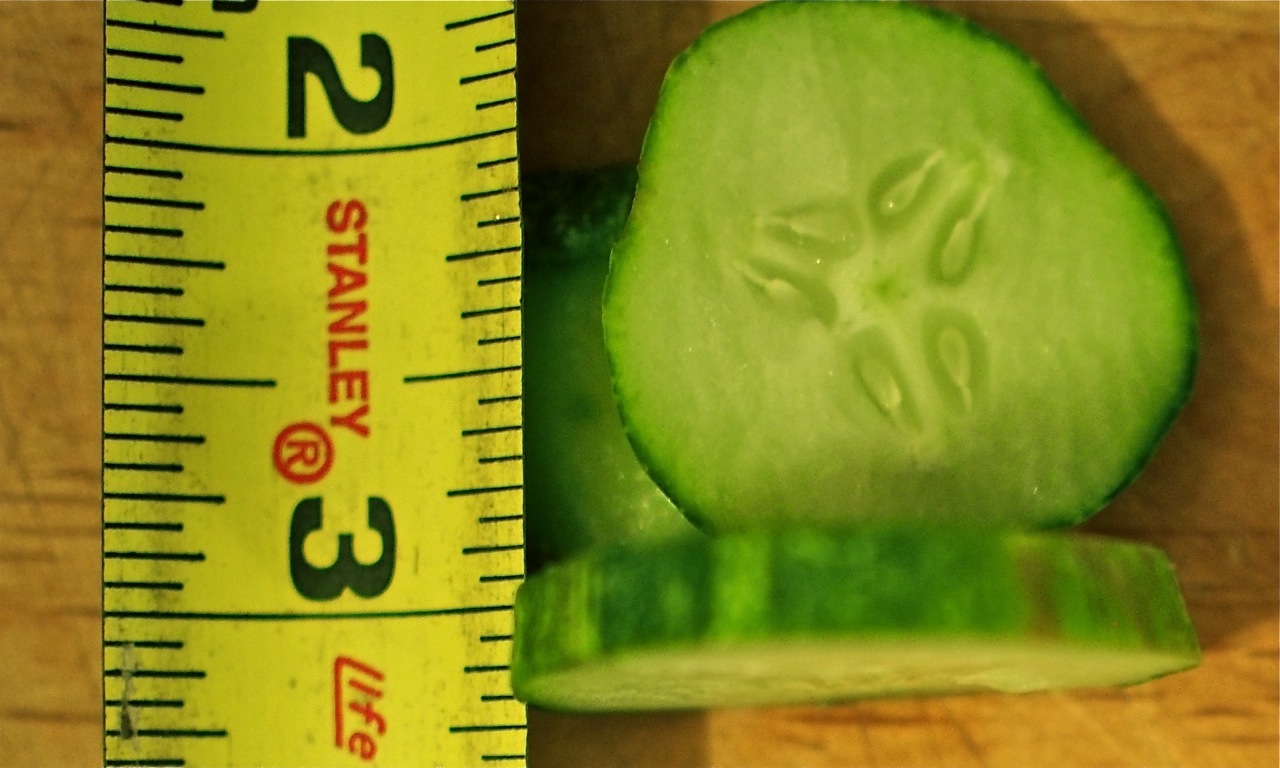 The NCHFP recipe for the bread-and-butter pickles suggested using calcium hydroxide a/k/a pickling lime for firmer pickles. Sliced pickles tend to get soft, so we went for it. (A mistake, I think—see below.) Calcium hydroxide is also used for nixtamalization, the process for softening corn for making tortillas and tamales; it’s called cal in Spanish. The large Hispanic population here in Philadelphia means that cal is easily available even though the ‘mainstream’ markets—whatever the hell that means—don’t have it. 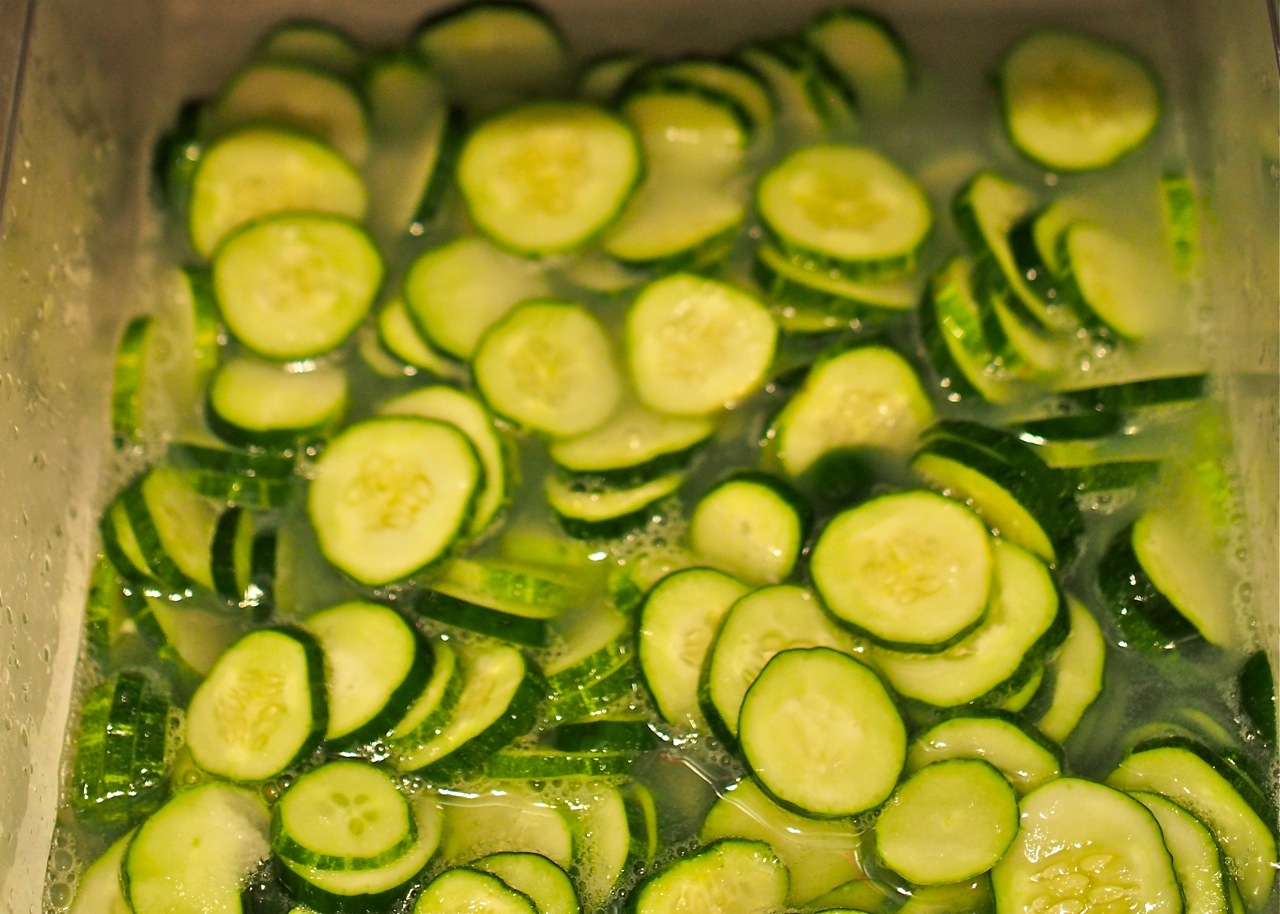 And so: into the fridge’s bottom drawer for a nice long spa session. This is my favorite way to brine larger quantities—I’ve done hams and turkeys this way. Make sure you clean the drawer well first! All told, these bulk purchases can play hell with fridge space—it may be time for us to get a reach-in for the basement. 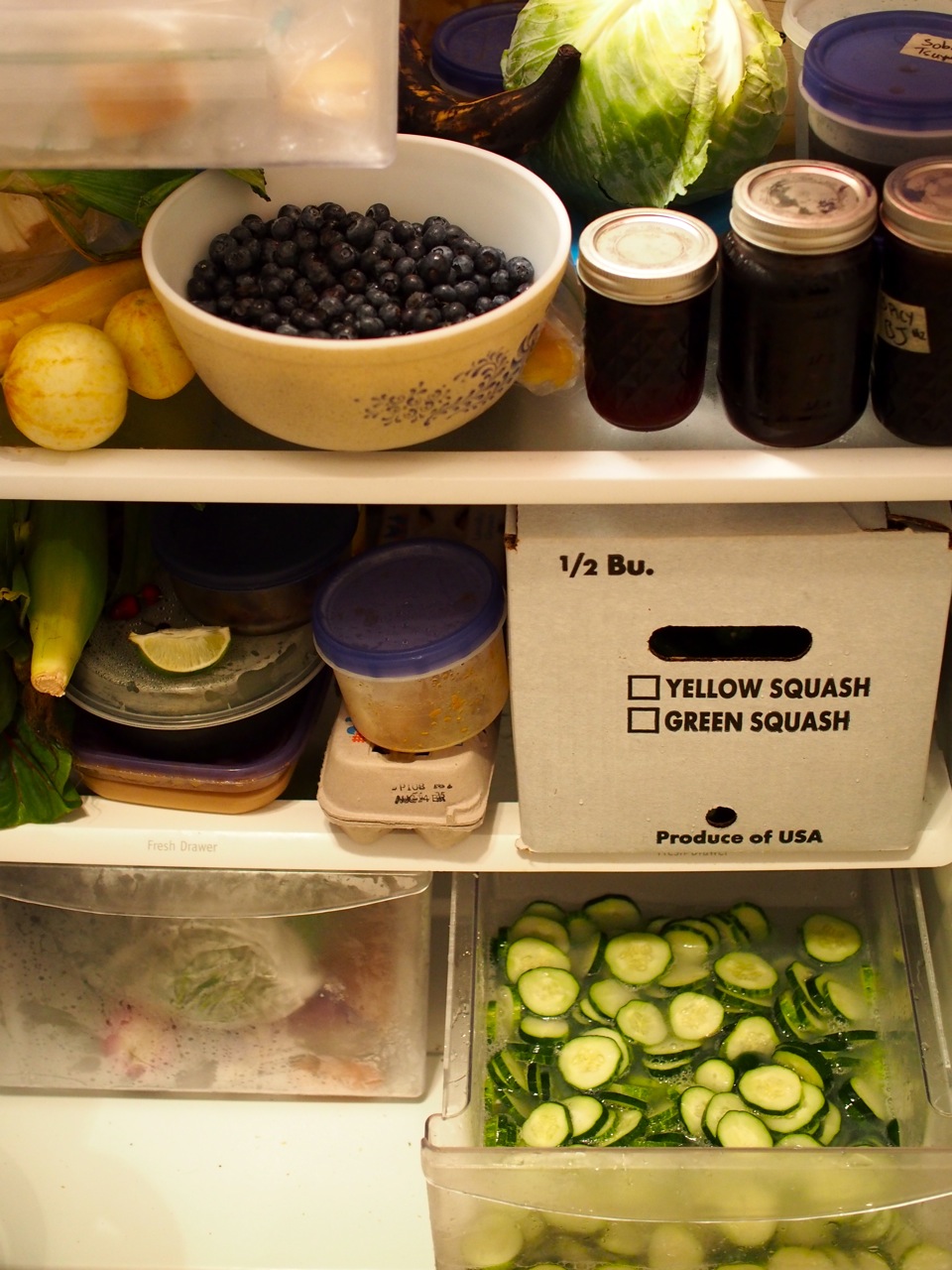 The relish recipe on offer at the NCHFP is quite simple and came out well. My notes say we followed their recipe to the letter, with the addition of 13g of yellow mustard seed.

The final product came out fairly wet—one jar didn’t seal, and we’ve been using a fork to strain the relish at serving time. But the flavor is excellent—salting and draining the sliced or chopped cucumbers before cooking and packing them may help next time. 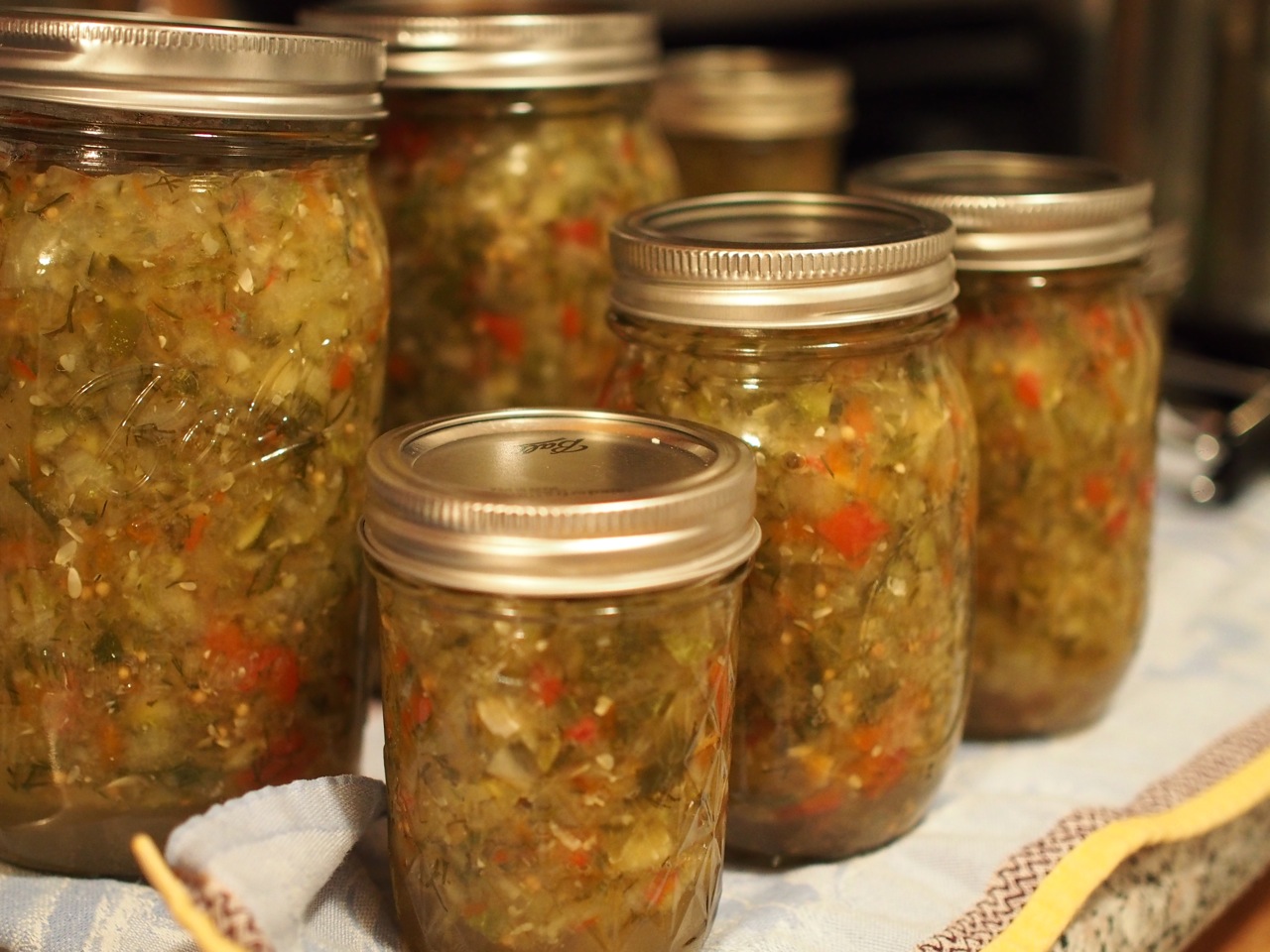 The bread-and-butter pickle recipe produces an enormous quantity raw, especially when you consider the chalky stiffness of the limed cukes. We had to use two pots! My notes show that we departed a bit from the recipe:

Some batches we added chili flakes. The cal definitely gave the pickles an alkaline flavor and slightly chalky texture.

Recording weights as you go is a nice way to compensate for the American cook’s unhealthy obsession with volume measures. I can only assume that we use volume out of some libertarian ethic of freedom, or perhaps as a form of puritanical self-flagellation. It’s certainly not because volume is convenient—have you ever measured 1T of honey?—or accurate—what about flour?

Even before canning, I noticed that the pickles were chalkily crunchy. Five weeks later—the recommended aging time—the chalkiness persists, though the alkaline flavor is mostly gone. I’d skip the cal next time. 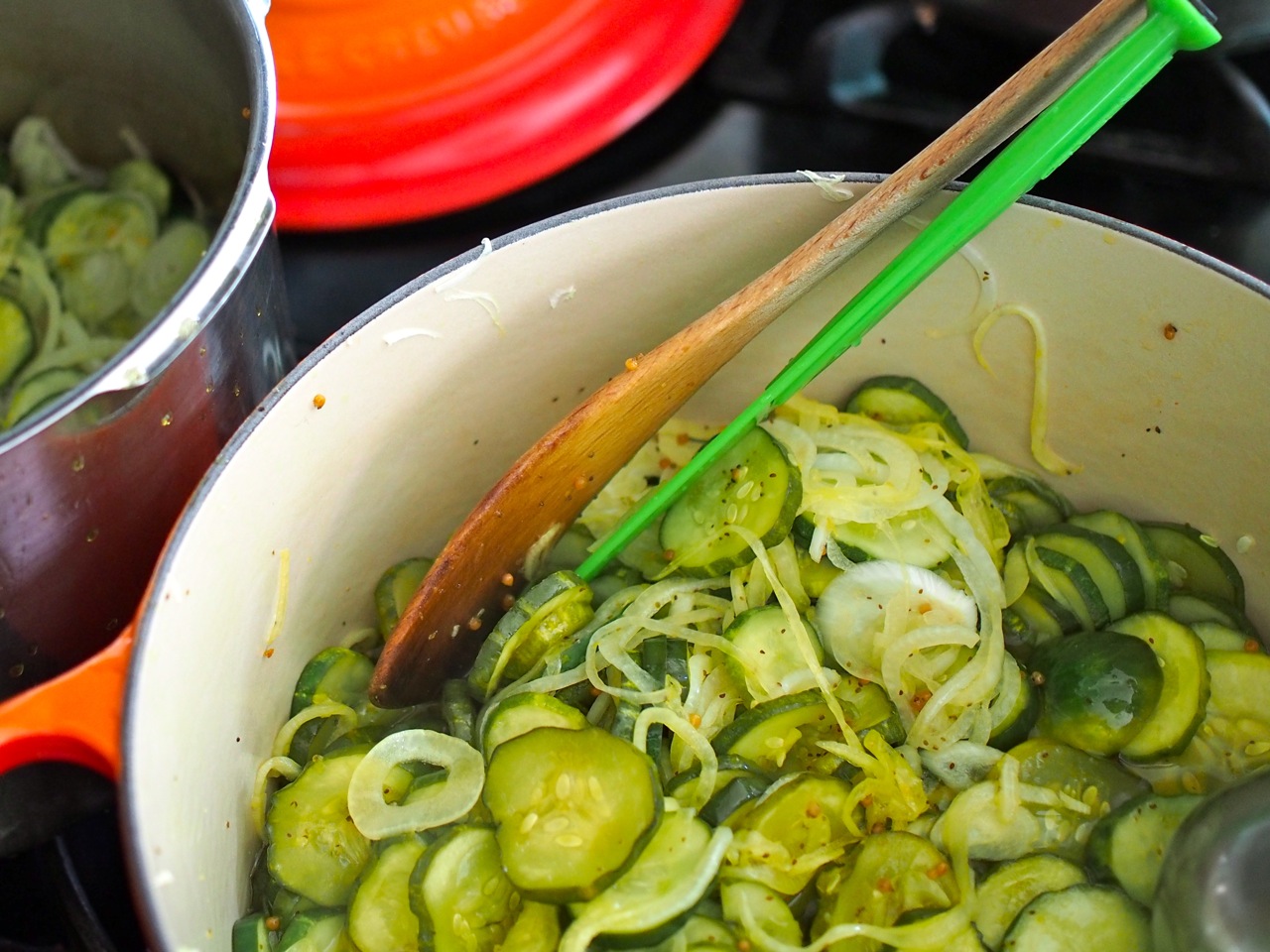 In my eternal pursuit of crunchiness, we opted for the “low-temperature pasteurization treatment”. The main idea is to trade time for heat, which keeps more juicy pickle structure intact. 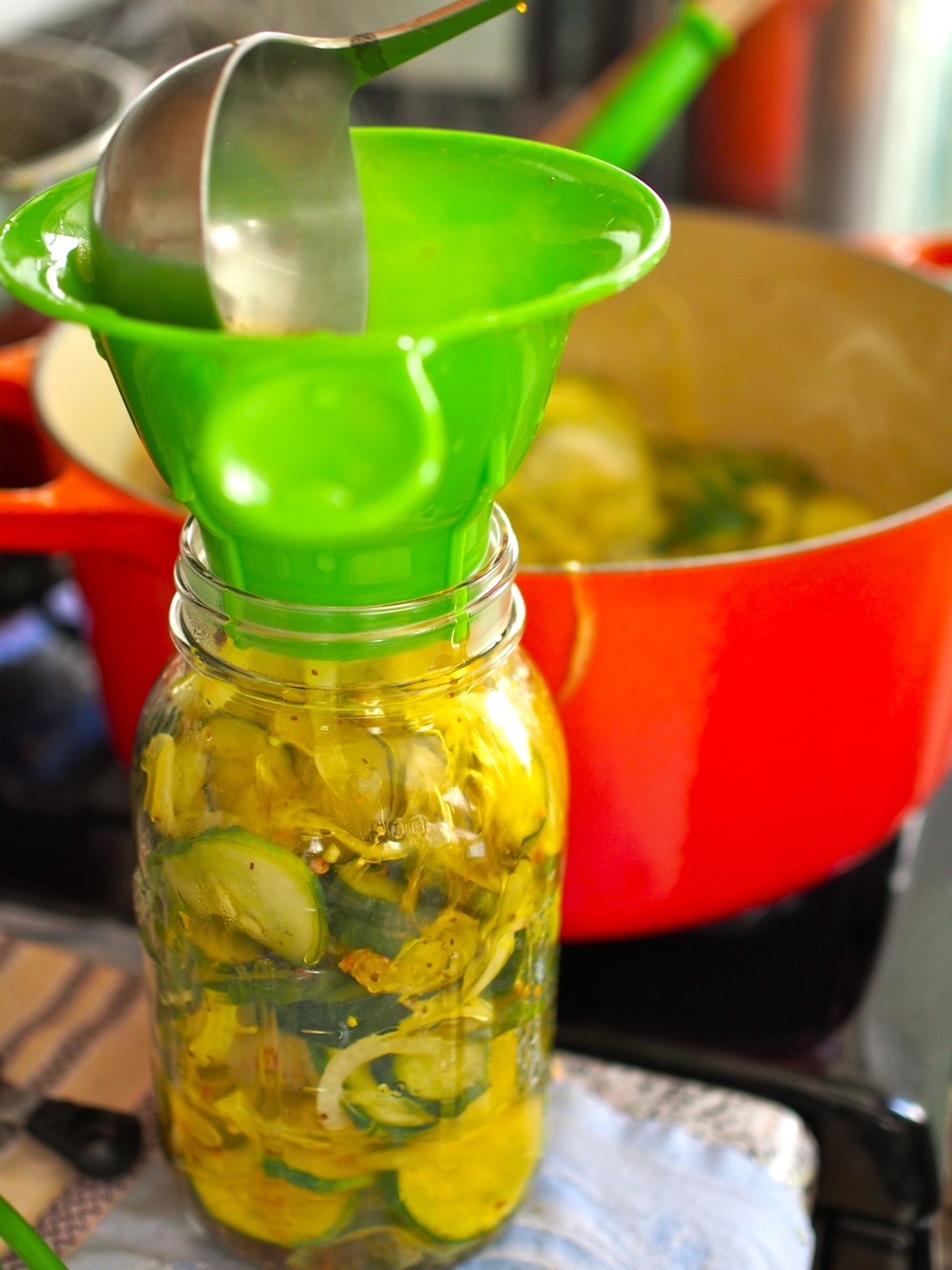 When you don’t have a big water canner, doing two thirty minute batches isn’t the most fun thing in the world. But the reward is pretty great, even if they’re not perfect. Next time we’ll be changing the spices a bit, since the celery seed is a little overpowering. We’ll definitely skip the cal and its chalky crispness. 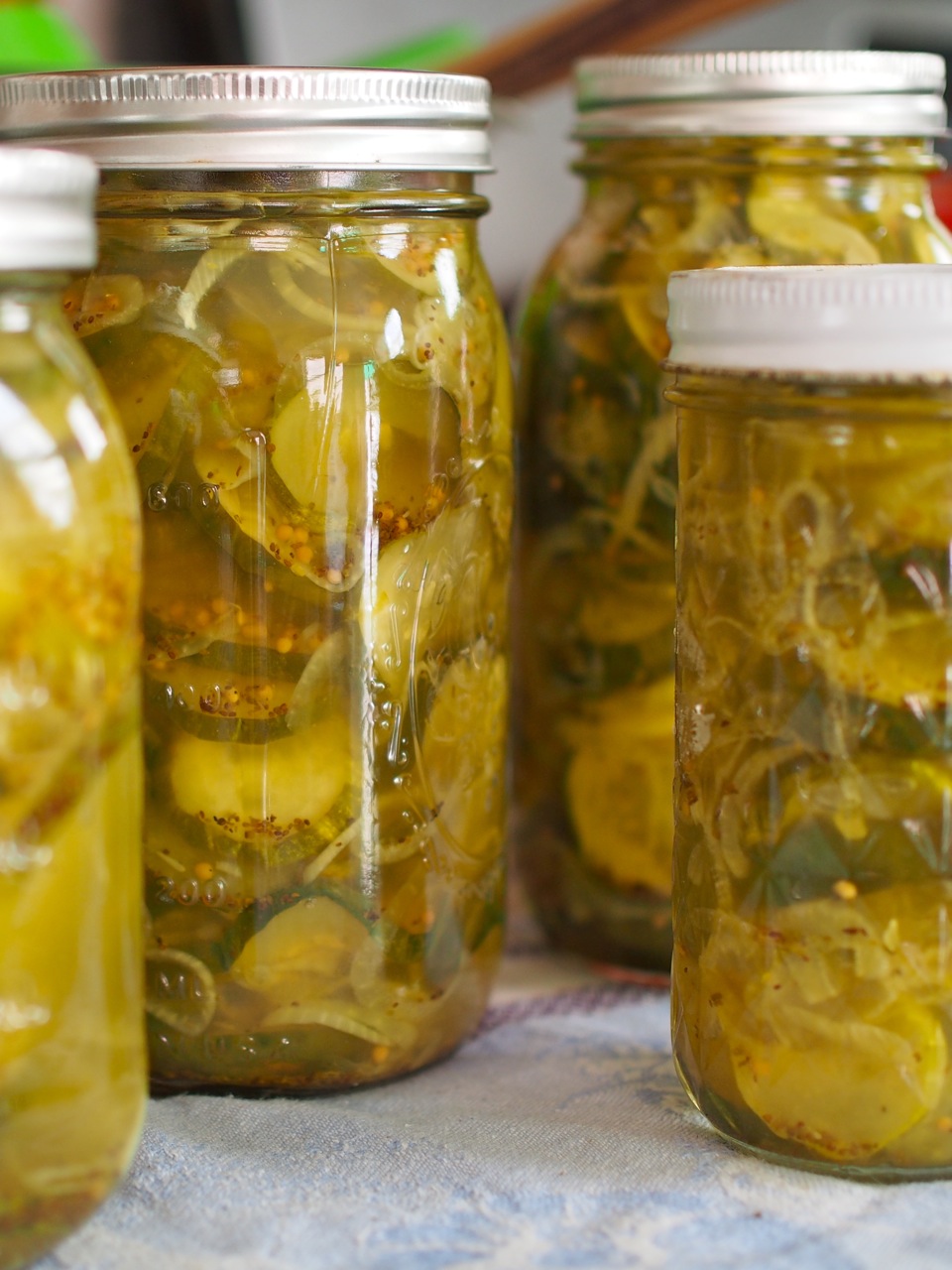 I apparently neglected to photograph Smitten Kitchen’s fridge dill pickles, but I do remember this: they came out impossibly salty at first. We had to rinse them before serving them at a party. They were tasty and we’ll make something similar again—but if only she had measured by weight….

This entry was posted in Preservation, Recipes. Bookmark the permalink.