Apparently, I’m what a feminist looks like. When considering the chocolate taste test, it didn’t even occur to me to break down tasters by gender—it took my friend Ruthie’s suggestion for me to realize that I hadn’t considered an obvious variable. (Thanks, Ruthie!) The tasting team comprised 6 men (Justin, Andy, John, Bill, Jonah, and I) and 4 women (Sydnor, Lizzie, Adrienne, and Nicole). 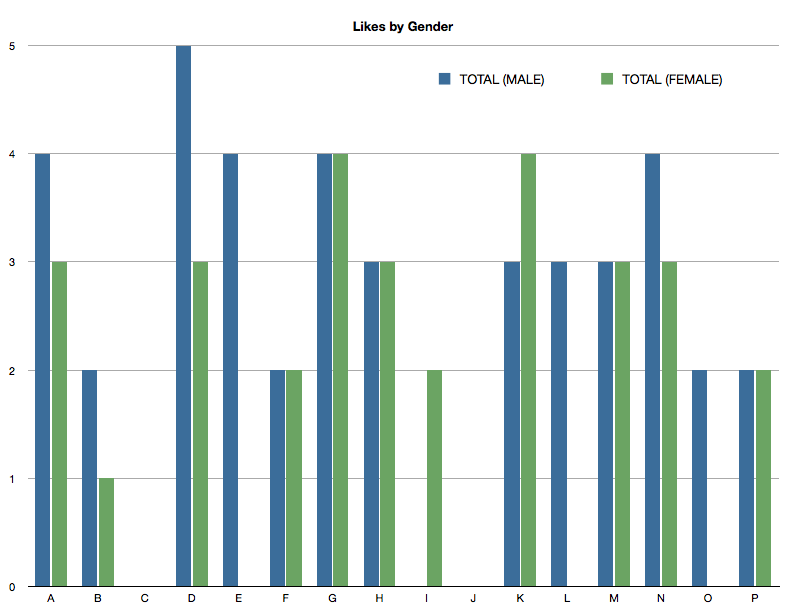 Likes weren’t particularly gendered except for samples E (Theo Organic), I (Mast Bros. Brooklyn Blend), and O (Pure Icelandic Noi Sirius).  Only men liked sample E (Justin, John, Andy, and Bill) and sample O (Bill and I); only women liked sample I (Sydnor and Lizzie).  You can see the spread in this updated summary chart, which includes lines for the male and female means.

While there are differences, the mean spread between male and female means is 0.46 points, with a standard deviation of 0.38 points. The “Likes by Gender” graph above shouldn’t be misinterpreted as some chocolates being “for men” and others “for women”—the gender effect seems to be a small one.

Update: Here are the full tasting notes for these samples. Not particularly illuminating, I don’t think.

One (over)interpretation of this is that women don’t want to eat poop dirt and men don’t want chocolate to stab them in the night—though I would have guessed these things were universal.

This entry was posted in Taste tests. Bookmark the permalink.